Electrum is an extension to the Alloy Analyzer by INESC TEC (the Institute for Systems and Computer Engineering, Technology and Science) and ONERA (the French aerospace research center) provides an analyzer for Electrum models, a temporal extension to the Alloy modeling language. The Analyzer provides both bounded and unbounded model checking procedures.

Alloy is a simple structural modeling language based on first-order logic developed at the Software Design Group. Its Analyzer can generate instances of invariants, simulate the execution of operations, and check user-specified properties of a model.

The best way to get started with Electrum is to download the executable jar (see Running) and follow the tutorial. You can also watch the following video for an overview. (The video was recorded for Electrum 1, so there may be slight changes on the interface.) 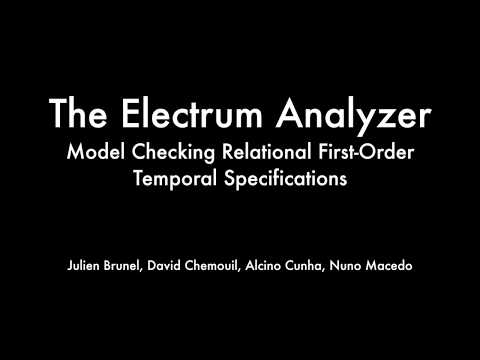 A repository of examples, including familiar Alloy examples converted into Electrum, is also available here.

Download the executable jar and launch it simply as

This will launch Electrum’s/Alloy Analyzer’s simple GUI, which is packaged with several examples. The file can also by run from the command-line, for more information run

To perform analyses on an unbounded time horizon, one needs to have installed Electrod program, as well as NuSMV or nuXmv. (REMARK: since version 2.1.2, Electrod is directly shipped inside the Electrum Analyzer; NuSMV and nuXmv must still be retrieved separately.)

The Electrum Analyzer 2 inherits the building instructions from Alloy Analyzer 5.

An extension of Electrum 1, with actions, is currently under study. Check out the paper with the preliminary proposal.

If you wish to build it, follow the building steps for Electrum 1, just replacing -b master in the first line by -b actions.

Our response to the ABZ 2018 call for case study submissions, the ERTMS, can be found here. Or access directly the:

Our response to the ABZ 2020 call for case study submissions, the ELS, can be found here. Or access directly the:

Electrum is open-source and available under the MIT license, as is the Alloy Analyzer. However, it utilizes several third-party packages whose code may be distributed under a different license (see the various LICENSE files in the distribution for details), including Kodod and its extension Pardinus, and the underlying solvers (SAT4J, MiniSat, Glucose/Syrup, (P)Lingeling, Yices, zChaff, CryptoMiniSat and Electrod). CUP and JFlex are also used to generate the parser.

Electrum has been developed in the context of the TRUST project, and incorporates contributions from several publications:

This work is financed by the ERDF – European Regional Development Fund through the Operational Programme for Competitiveness and Internationalisation - COMPETE 2020 Programme and by National Funds through the Portuguese funding agency, FCT - Fundação para a Ciência e a Tecnologia, within project POCI-01-0145-FEDER-016826.